“Life is a daring adventure or it is nothing.”  Helen Keller“What gives value to travel is fear.”  Albert Camus 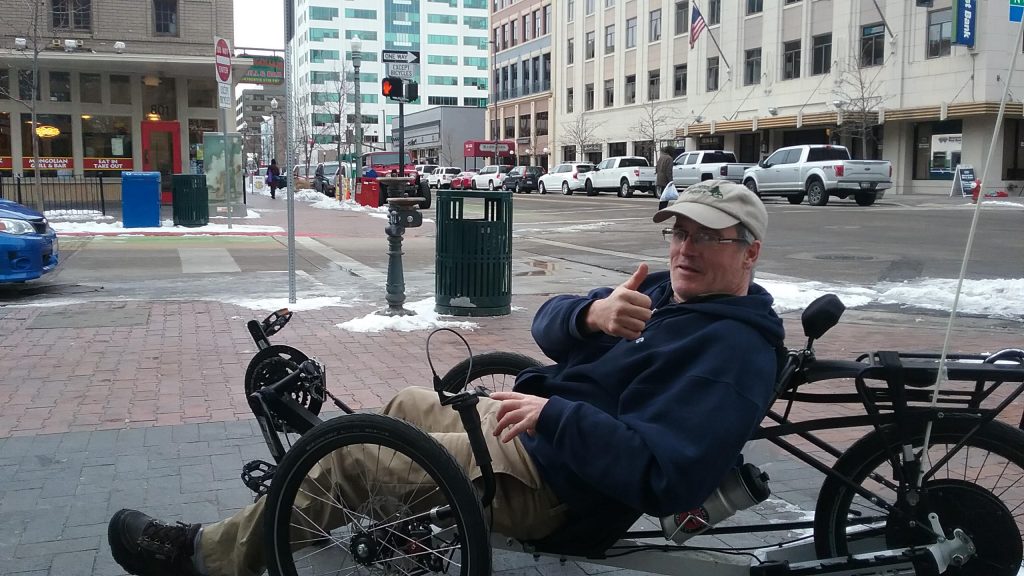 After my prosaic marriage fell apart I moved to Boise, Idaho from California to be closer to my mom. At first I was stilted in action and thought, lost in transition, but as the days roll you thaw to new way of life. I was visiting some friends and one of them had a recumbent trike that I liked very much. So I bought myself a shiny red recumbent trike at age 47. I don’t live far from the Boise Greenbelt so getting out to ride it was a joy. Amazed at the newness, the seasonal colors and the smell of sage and the cottonwoods along the fast moving river. The crispness of air and the sound of the ponderous flight of the geese going South is the grandeur of nature from a bike. Its the adventure of freedom and ownership, no matter how small the trip is. I saw a quote by Fredric Schiler said, “Man is never authentically himself as when he’s at play.” I enjoyed the freedom of being on trail, moreover, impressed that someone saw the the recreational potential, its smart land use.

The biking community is welcoming. In my pedal powered peregrinations I’ve met some good people on the Greenbelt that have helped me get around to other bike paths. See, I don’t drive which makes going to other bike trails around the state very difficult, so a fellow biking friend took me to the Weiser River Bike Trail, an 84 mile long rails to trails, taking old abandon rail llines and repurposing them as bike paths. The trail starts in low land farm country to Alpine Mountains of Ponderosa pine. Other fine trips have been to McCall, Idaho, my friend, David “Dry Wall” Jurries, took me up there to ride the trail around the Payette lake and some bike paths through the town. We also went to Riggins, Idaho. Mostly to go rafting as its the headwaters of the mighty Salmon, also called the river of no return. I did get to ride the mile or so of greater Riggins main street as well as a little unincorporated town of Pinehurst.

I’m working out these days, stretching, yoga’ing and some meditation to help quiet the mind and keep me limber and in shape so I can do Ride Idaho, a 7 day 400 mile tour with 300 hundred riders through the most spectacular vistas of the state. Being comfortable where you live and the people you meet provide that safe and comfortable space to do something ambitious like this. Cynthia Gibson at the Idaho Walk Bike Alliance who suggested I could do sections of the Knobby Tire Tour, a mountain bike ride to Idaho City. Because of that tour I met Bret Tinker, the organizer and president of Ride Idaho. I said I’ve been thinking about doing the tour, he stopped my hesitations and said yes I could do it because its van supported and rest areas are every 20 miles. Its the power of acknowledgement & confirmation that got me to sign up. I think, left to my ruminations and hesitations I would of let it slip through time. I’m glad I didn’t give in and preparing  for it mentally and physically, all with the thought I’m there to have fun made the experience so much more enjoyable.

June 24, a week out from the tour. Stopped by Higher Grounds, an adaptive recreation program for wounded veterans as well as non veterans, in Ketchum to pick up a Catrike to ride the Blaine County Recreation District Trail. I think I did about 30 miles to Bellevue. Absolutely fun. The Catrike is a smooth and fast ride with a quick turning radius. I used a KMX Thunderbolt recumbent with electrical assist for the event. This wasn’t a race so I only engaged the assist on hills or  when I needed to catch up to the group. There are plenty of bikes in town, but no designated bike lanes or sharrows; however, the town does boast an excellent bike path system. I rode north of Ketchum to Hulen Meadows and then Warm Springs and then past Sun Valley to trail creek.

With all these bike travels and writing, working out, I’m finding it’s slowly changing my script. Its still my script, and I deal with it everyday, but its lessening, an acceptance. I’m hard on myself as if a coach, yet that inner coach pushing us further to play harder, to know and appreciate the difference between mere trivialities of existence and deep abiding bond between yourself and life, thats passion, thats love.

I did it!! 275 to 300 miles from Ketchum, Idaho to Arco to Victor, just outside Jackson Hole, Wyoming. Didn’t attempt the Teton Summit, way to steep for my trike, nor did I go down. SAG’ed all the way in to the town of Jackson Hole, after a day lay over we crossed the Idaho border to Idaho Falls, the end of the tour. We were silent for the bus trip back as work schedules, family life would begin again as we arrived in Sun Valley. All 300 riders, some locals and some from other states, who have done this tour several times because of the camaraderie and how well organized it is, but all of us came together for those 7 days for a fun adventure through beautiful country. The spirit of adventure is alive and well.